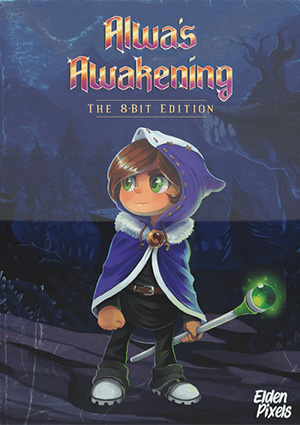 Alwa’s Awakening 8bit Edition is a really good game. It is a de-make of the original. They did a really good job at downsizing the levels. It brought back childhood memories, when I was playing the original Metroid, or Castlevania II. They had huge worlds to explore. This spoiled generation will never know the fun we had drawing maps and taking notes of where things were! Just kidding, it was a pain! I’m glad we have access to the map at the touch of a button in this one.

The puzzles are simple for the most part. You have to push blocks on switches to open doors. Easy stuff, although sometimes you have to pause and think. There are also some tricky jumps to make, so you have to carefully plan how you’re gonna get to that ladder with a combination of your levitating bubble and the floating green slime block thingy. There is some place I couldn’t reach, and I just quit trying and moved on. When you jump, you float in the air a little while, it is strange physics, but it feels right gameplay-wise. You have more control over where you land, and it is very handy to avoid projectiles.

There is an excellent soundtrack by Robert Kreese to accompany you on your journey. Catchy tunes, varied and well suited to your environment.

After a few hours of play, I felt the game got repetitive, and I kind of hoped it would finish soon. When I finally arrived at the Amethyst Passage, it was really tough, and I thought it’s where I would beat the last boss, but a whole new area to explore appeared! Geeez! Paradoxically, that was the moment I thought “Man, this is an awesome game, and it’s huge!” The novelty of the new area’s design was enough to keep me pushing forward. I gotta find and slay that bad guy!

So, overall, Alwa’s Awakening 8-bit Edition is a solid platformer with metroidvania-style exploration, charming NPCs and awesome bosses to fight! A must!

No comments to show.