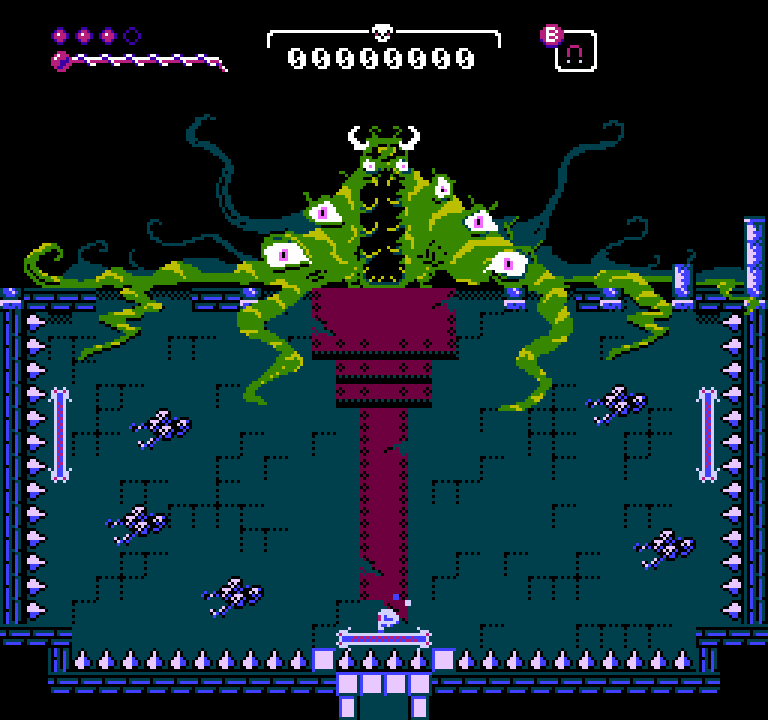 I thought I’d share a little update. I finished the core engine back in November, and began the level creation phase. I will make as many levels as there is memory available. I’m too lazy to do the math and see how many precious bytes I still have left, but even then, each level vary greatly in size, so I wouldn’t know anyway. My aim is to have at least 40 levels, plus 4 bosses. So far I have close to 20 levels and 2 bosses. Here’s the epic temple boss:

Design, NESST, and coding took me more than 30 hours of work, and I have yet to code the boss’ tentacles fighting patterns. Hours of pleasure… and pain!

Since my game is an ‘Arkanoidvania’, I obviously get asked the following question very often: Will you be able to eat chicken you find in walls? The answer is yes. The second most asked question is: Will I support the VAUS controller? For those of you who don’t know what a VAUS controller is, it’s a special controller that came with the original Arkanoid for the NES. It had one knob, and one button. That’s it.

Unfortunately, I decided not to support it. As you can see in the screenshot above, some levels will have more than one paddle, even vertical paddles. So having only 1 knob is not enough. I also make use of the 4 buttons of the NES controller, so having only 1 button is a bummer. When I started the project, I thought about building my own special controller, with 2 knobs, and 4 buttons! The idea is great, but I’m not sure it really is worth all the money, trouble and time it would require.

The first area of the game is now complete, although some gameplay element still needs work. There will be three interconnected areas in the game. The village and it’s surroundings, the forest maze and the Lair of Kharzoid. (The Temple on the screenshot above is a dungeon in the first area). I am now beginning the level design of the forest maze. I took the original design I made at the start of the project, but I changed the colors. Looks more creepy that way. I love this tileset.

I plan to finish the game in March 2023. I will definitively go for a physical edition. I already found a great artist to paint the box artwork. Can’t wait to show ya! But I wonder how I will produce the physical edition. Go with Kickstarter? Find a publisher? Both? Don’t know. I am not in a hurry. I will take the time to evaluate all options.

2 thoughts on “A small update”