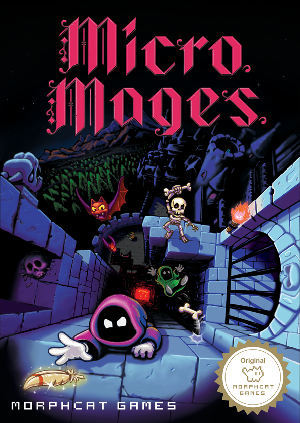 Micro Mages is certainly a flagship title in the NES homebrew library. It ran one of the most successful Kickstarter campaign for a homebrew game, received a lot of praises and is still very actual. Indeed, Morphcat just released Micro Mages: Second Quest (from what I understand, it’s a ROM hack they made of their own game!) and an Evercade physical release. So, is the game worth all the craze?

Micro Mages in the multiplayer of madness

I invited my good friend and fellow game developer @gravelblock for diner last night and I suggested we tried Micro Mages. He is not into NES dev, but he heard about it and wanted to try it. I mentioned this to show that I have friends, at least one! I also mention this because the multiplayer aspect is one of the selling point of the game. It supports up to 4 players coop with the Four Score adapter. I don’t have that many friends, but the two of us sure had a great and hectic time.

In multiplayer mode, I like that you can either fight to get the best score or cooperate to overcome challenging levels. When you die you become a ghost so you can still help your friends, but in a limited way, a bit like Spelunky. There is a “Blood Bonds” mode where if you die, you all die. We didn’t dare to try it! It appears the game also has a Hell Mode, with faster enemies and scrolling speed. If you run out of live, you must restart from the beginning. This is madness, but it sure gives the game some replay value!

Of Princess and mages

The story is simple. Princess went missing after you forgot to lock the door! (It will make more sense after you finish the game). And since strange things are happening at the Demon Fortress on Pretzel Mountain, you decide to go there and hopefully rescue your beloved Princess. The gameplay consist of auto-scrolling vertical levels you must climb while fighting enemies and avoiding traps. After a few levels, you reach the top where a big boss is waiting to swoop your mage’ butt.

The pixel art is rich and detailed. There is a wide variety of environments: Dungeon, Jungle, Ice, Volcano, you name it. Since the Mages are 8×8 pixels in size, most blocks are also 8×8, instead of the usual 16×16 we usually see on the NES. This gives an impression of grandeur, and allow much room to navigate the nicely designed levels.

The music and sound fx are also nice and give personality and charm to the levels.

Make sure to read the manual! It contains funny stuff, but also useful tips and tricks that can improve your playing.

I’ve been wanting to make a NES game for a long time. Long before it was trendy, long before NES Maker appeared on the scene and unleashed a ton of games on the homebrew scene, I was studying assembly and trying to use Famitracker. I still can’t by the way, I now use FamiStudio. The problem was the lack of time. I solved this problem in 2022, I took a sabbatical year to realize my dream! The Micro Mages Kickstarter campaign is the spark that ignited my own NES project. I don’t expect to have success comparable to this, but it was an inspiration. It told me it was possible. So I am really thankful for that. It shows that people were interested in good, fun retro games.

What’s in a byte

Another selling point of Micro Mages is that is was made to fit a basic 40kb cartridge. 40kb might not mean anything the younger generation, but it is barely enough to store 2 seconds of mp3 music. It is the size of the first Super Mario Bros game. They made a video about how they fitted all the code, graphics and music in such a small memory space, and it attracted a lot of attention. It shows that it was made by competent people, passionate about their craft.

The game obviously draws inspiration from old NES classics, but it has a surprising modern feel to it. Like other Morphcat games, it is very creative, polished and well designed. So to answer my question “is it worth all the craze?” You bet it is! My kids were watching us play, and they were cheering and shouting as we made our way to the last boss, with a sore thumb and only 1 life left. We finally beat it, and it was such a great and satisfying moment. So go buy the game, go make some friends and convince them to play with you! You won’t regret!