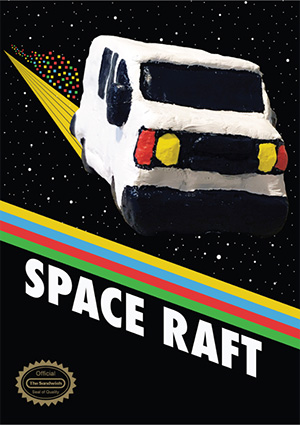 Space Raft is a rock band from Milwaukee. One of the member, Jordan (Raftronaut), decided to make some chiptunes inspired by his composition, and it ultimately morphed into a full NES project. According to him:

The game features music from the band Space Raft, as well as personalities and locations (music venues, bars and record stores) from the Milwaukee music scene.  Since this project was essentially meant for the Rock audience. […] There are a mix of obstacle based scrolling levels in the band […]  and top down adventure levels where you’ll have to clear all the sandwiches before the former bass player Srini (included per his request) gets you.

I didn’t know what to expect but I did enjoy it. It is weird, it is challenging, it is fun. You play as a band member, you can switch between them, each having his own weapon.  That’s a nice feature, although I played as TJay most of the time. Although I didn’t get all the references and easter eggs from Milwaukee, I played in a band a long time ago so I  could certainly get the vibe, and the food extravaganza! Except that here, in Quebec it’s poutine all the way, before, and after a show.

The strong points are the music (of course), the diversity of gameplay and the food! I was also surprised by the scope of the dungeon-like levels. The game has a lot of humor, but make sure to read the manual as in contains some funny stuff too!

On the downside, the game overall feels rough and unpolished, and the controls are difficult. It’s not a secret that I’m not a NES Maker fan (sorry Dale ☕), I think the game suffers a bit from this messy piece of software. It’s nothing major though, you’ll get used to it.

Overall, Space Raft is a nice and enjoyable homebrew NES game to add to your collection.

Now excuse me, I have to go eat something 🍔 Cheers 🍻