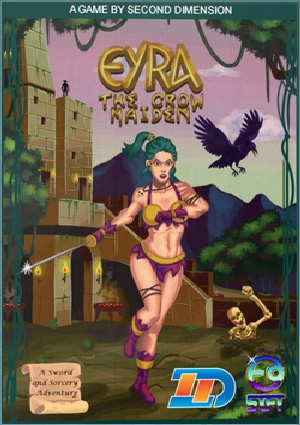 While mindlessly browsing eBay to find some hidden gems for my NES collection, I stumbled upon Eyra, The Crow Maiden. I had never heard of it, but it looked cool and I like to support homebrew developers, so I bought it.

The game feels like an early NES title that was recently rediscovered. The game captures the spirit of the era: The graphics and gameplay are very basic, you have a score, it is very linear and it is difficult. I grew up with the NES. I played some difficult games like Ninja Gaiden, Ghosts ‘n Goblins and Sesame Street ABC. Just kidding, I never played Ghost ‘n Goblins, but I did beat Ninja Gaiden without losing a life. I still have the muscle memory to prove it. Back then, we had a lot of time to spend trying to beat those games. But I’m older now, I have a wife, five kids, a dog and a NES game of my own in development.

L’Abbaye des Morts was also a difficult game, but I was willing to continue. There was that little edge that kept me going.

The problem with Eyra, is that the difficulty is not fun. You often die because your weapon don’t land a hit, or there is some weird collision detection hit. Some enemies are coming at you from impossible angles. So I would probably enjoy it more if there was a continue option. Even Ninja Gaiden had one! They omitted it on purpose, and this is sad, because the levels are long, and the pain to restart from the beginning was enough for me to rage quit after a few hours. The bosses are the easiest part. Their patterns are easy to notice, and your crow is powerful enough to kill them in a few hits.

Overall, Eyra, The Crow Maiden is a good retro platformer. I enjoyed it for the most part. The music is awesome and memorable, I really liked it. If you are prepared to die and restart from the beginning a lot, it is a good addition to your collection.